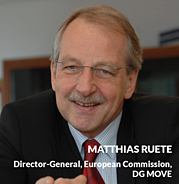 Mobility lies at the heart of the European Single Market. It allows citizens to enjoy the freedom to travel and it permits commerce, growth and the creation of jobs. The competitiveness of European companies is significantly determined by the efficiency of freight transport and logistics. Due to increasing specialization, but also due to changes in consumer behaviour the volume of freight traffic in the European Union has increased in past years. The international division of labour has generated growth and prosperity, but also caused congestion, noise and emissions of greenhouse gases. It is therefore our aim to steer the growth of freight transport towards sustainable and efficient tracks.

Currently only about 10% of European cargo and 6% of passengers are carried by rail. If we want to get more passengers and freight on Europe’s railways, customers need to have an attractive choice.

The 4th railway package aims at completing the internal market in rail transport by allowing access to the market to all operators in order to improve service quality and efficiency. The independence of infrastructure managers needs to be strengthened so that they can ensure fair access for all European operators to the railway. The European Railway Agency should become a “one stop shop” issuing EU wide vehicle authorisations for placing on the market as well as EU wide safety certificates for operators. A more competitive and more widely used railway system will contribute to the competitiveness of our manufacturing industry and benefit users and public budgets alike.

Much progress has been made. The European Parliament completed its first reading on the whole package at the end of February, supporting the Commission’s ambitions on the technical pillar.  At the same time the European Parliament did not follow the Commission’s ambition on the key role of infrastructure managers in the rail system and on the issue of tendering for public service contracts. The Council is about to complete its examination of the technical pillar (interoperability, safety and the reinforcement of the European Rail Agency) and should have reviewed the market pillar (domestic passenger services market opening and governance issues) before the end of the 2014.

In past decades, significant investments in EU rail research and innovation have helped the European rail supply industry to retain a leading position at global level, namely with the development of high-speed trains, ERTMS (European Rail Traffic Management Systems), automated metro systems, etc. However, a recent Commission study on the competitiveness of the railway supply industry shows that Asia is steadily overtaking Europe as the largest rail supply market, namely thanks to a surge in research and innovation investments in countries like China and Korea. Past levels of rail research and innovation funding have been relatively low. They were not able to trigger breakthrough, market-based solutions.

Therefore, the European Commission now suggests a public-private partnership by contributing €450 million to the new Shift2Rail Joint Undertaking over the next seven years – three times more than what was invested in rail research at EU level in the previous period (2007-2013). The EU’s investment will be matched by €470 million from the rail industry. Our ambitious targets are an increase in rail operating capacity of up 100% and in reliability up to 50%. At the same time, deployment solutions will be developed to reduce costs as well as accelerate the construction, operation, maintenance and renewal of infrastructure.  All these innovative measures should lead to reduced costs of the overall railway system.

To complement the technical and market pillar, the Shift2Rail Joint Undertaking will strengthen the link with the market, as suppliers and the end users of rail research – i.e. rail operators and infrastructure managers – work hand in hand to deliver market-based solutions. Indeed, the railway operating community will be directly involved in defining research needs and assessing and validating research results. Therefore, on the one hand, Shift2Rail will generate benefits for the European rail supply industry (i.e. manufacturers of products and components for railway operation as well as their suppliers and service companies), whose future in a more and more global market depends on the competitive edge they can derive from the timely development and deployment of innovative and integrated rail solutions. On the other hand, railway undertakings and operators, and of course also rail infrastructure managers as well as rail regulatory and safety bodies, will benefit from innovations enabling increased reliability, quality and safety of services.

From patchwork to rail infrastructure network

The new EU infrastructure policy will put in place a powerful European transport network across 28 Member States to promote growth and competitiveness. It will connect East with West and replace today’s transport patchwork with a European network of nine (Core Network) corridors. Each corridor includes at least three modes of transport, three Member States and two cross-border sections. It will connect 94 main European ports with rail and road links, 38 key airports with rail connections into major cities, 15,000 km of railway line upgraded to high speed and 35 cross border projects to reduce bottlenecks. The Connecting Europe Facility (CEF) budget amounts to EUR 26.25 billion between 2014 and 2020.  The CEF gives priority to the development of infrastructure for the greener modes of transport, such as railways and inland waterways. Major rail projects which can potentially benefit from the CEF include the Brenner tunnel, the Fehmarn-Belt and Rail Baltic.

If we want Europe to regain its economic strength, we need to connect to compete. Only by a combination of measures (internal market, innovation, infrastructure) can Europe ensure that transport remains affordable, reliable, safe as well as sustainable to assure Europe’s position in international competition. Rail plays an important part in this future.