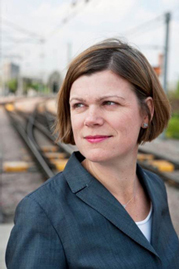 This year, Eurostar and the Channel Tunnel both celebrate their 20th birthday and Southeastern marks the fifth anniversary of domestic high-speed services between London and the south east of England; this is therefore an appropriate time to reflect back on what we have achieved over that time in delivering these new services.

The stations served by the UK’s only high-speed line are thriving. Since its reopening seven years ago, St Pancras International has been the nation’s favourite station every year following the redevelopment, topping the National Passenger Survey. We have seen growth at St Pancras both in terms of footfall and dwell time; more than 48 million people visit the station each year, spending on average 40 minutes visiting the shops, bars and cafés before they board a train. Indeed, for more than 12 million of the people who come to the station, the station itself is the destination.

Amongst those who are there to travel, though, we have seen impressive increases to the numbers of passengers using the high-speed line, both domestically and internationally. In just the last year Eurostar carried more than ten million passengers for the first time in its history, while Southeastern’s domestic services have seen an increase of more than 60 per cent in passengers at Ashford and Ebbsfleet since the line opened.

Central to this success is our service-led business model, which has been celebrated by the UK’s rail regulator as leading the way in Britain’s rail industry. We pride ourselves on the satisfaction of our customers, whether they be train operating companies and freight companies, the retailers within our stations or the passengers and shoppers whose numbers continue to grow year-on-year.

Anniversaries are also an important time to look forwards, and we believe the growth in customer satisfaction can only be sustained if our partnerships approach continues.

Of course, one of the main reasons why these partnerships have been so productive is that together we have managed to get ahead of the curve in determining what it is that customers want and expect – and it is this momentum that we must continue to harness. Good working relationships are the key to deliver customer satisfaction.

Increasingly within the industry we have to look at trends to see what customers are going to be expecting in five years and deliver them before that timescale. We recently rolled-out Wi-Fi at St Pancras; this is not new for a public space, but in recognition that our customers demand connectivity of the highest calibre we installed the fastest public space Wi-Fi in the UK. This allows a passenger to download a film long enough to last the journey from London to Paris in the time it takes them to walk from the platform to their seat.

Our context also continues to change. The UK Government has announced plans to develop a new Garden City on our doorstep at Ebbsfleet, in Kent. With our Ebbsfleet International Station at the centre of the planned development, high-speed rail sits at the physical and conceptual centre of the project.  This is strengthened by the proposed entertainment resort to be developed by Paramount, close to the Ebbsfleet site, which has the potential to transform tourism in the south east. Once more, much like in France with Euro Disney, high-speed rail will be at the absolute heart of the plans.

At national and international levels, too, plans for the LISEA consortium (running the high-speed line between Bordeaux and Tours), HS2 and further high-speed lines are at varying stages of development but move closer to being a reality. HS1 will eventually be joined by sister lines connecting other parts of the country and abroad, and we are working with industry colleagues to share the expertise we have from these first years of operation.

In Britain we expect a lot from our high-speed railway and it is up to us and our industry partners to plan for future demands and expectations.  The highest quality engineering and technology contributed to the creation of this railway and it’s a key part of our job at HS1 Ltd to protect the infrastructure, maintaining and improving it so that, at the end of our concession in 2040, we return it to the Government in superb condition.  We have been built for the long-term, and we look forward to the future enthusiastically.